| Write the First Review
Need Expert Advice? Our friendly and knowledgeable staff is ready to help you. Call us now at 1-800-875-9145!

The Power Plate Pro5 AIRdaptive HP are for those who are not wanting to spend time on gym-based strength work, core stability exercises and stretching, preferring instead you will be pleased to hear the secret to avoiding injury and recovering quickly between runs and workouts by spending hours lifting weights or lying on gym mats easing out every muscle. Just 10 - 12 minutes, two or three times a week on Power Plate will do the trick.

If your a runner, running can cause your muscles and joints to become stiff and sore. Every runner is different, but typically the most common problem areas are:

Muscle tightness in the calves and glutes caused by the repetitive patterns of running
Limited ankle and hip joint mobility caused by restriction and tightening of the muscles and connective tissue around ankle joints and the surfaces of the feet (plantar fascia)
Tightness in the front hips – often caused by overuse of the front hip muscles – quads, psoas and Tensor Fasciae Latae (TFL) as a result of dysfunction in synergy with the more powerful muscles on the back of the hip (hamstrings and glutes). In addition extended periods of sitting, for example at a desk at work, can lead to restriction and limited extensibility in the front hip area.

Using the Power Plate Pro5 AIRdaptive HP can help you get far better sport-specific benefits. With skiing, for example, stand in a crouched ski squat position for 30 seconds, and your quads will receive a more appropriate training stimulus than any standing squat against a wall. You can get similar benefits for your golf swing, rugby scrum and so on - just stand in the sport-specific position.

Perform each exercise for 30-45 seconds and move straight on to the next one. For best results, perform after a preparatory walk on a treadmill and/or some functional flexibility (stretching) exercises as required using Power Plate. 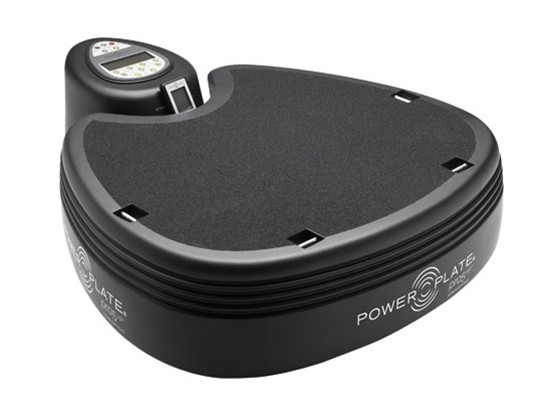 Regeneration of Energy, Skin, Mind and Body
Naturally produced growth hormone (GH) maintains bodily functions such as tissue repair, muscle growth, brain function, bone density development, skin thickness, energy, and metabolism, throughout life. As we age, GH levels diminish and associated body functions suffer (Rudman et al. 1990). Researchers, who focus on anti-aging, have been searching for ways to maintain and increase GH levels throughout adulthood. Since Rudman et al reported in The New England Journal of Medicine; Effects of Human Growth Hormone in Men over 60 Years Old, physicians have been prescribing GH for anti-aging purposes. These GH therapy prescriptions cost patients up to $30,000 USD per year and require daily injections. With the desire to find an easier, safer, and more affordable way to stimulate creation of GH naturally within the body, researchers have begun to look at reflexive movement of the human body as a gateway to stimulate this natural anti-aging effect.

Reflexes Can Create
Positive Hormonal Responses Deconditioning affiliated with aging is similar to the deconditioning experience in space travel in a weightless environment. Whole Body Vibration (WBV) was first developed by Soviet scientists in an effort to heal cosmonauts from the deconditioning from being in a weightless environment (Rittweger, 2010). They noticed that even when an individual is too weakened to voluntarily contract a muscle, their reflexes engage the muscle. They designed a platform to destabilize the body in order to engage reflexes throughout the body to accomplish their objective. Positive outcomes led to clinical research and an understanding of the health benefits. Researchers in Italy (Bosco et al. 2000) demonstrated this destabilization had a more powerful effect on the hormonal balance of the body than regular exercise. They saw a naturally occurring 460% increase in GH post destabilization stimulation with athletic males (Bosco et al. 2000). This was more than double the GH compared to existing research on conventional exercise and GH stimulation. Numerous researches replicated this study with GH changes ranging from 435% (DiLoreto et al, 2004) - 560% to 2,600% (Sartorio, et al. 2010) - 1,375% (Guinta, 2012) following exposure to vibration. These results indicate a similar but safer benefit can be achieved with WBV than with anti-aging GH prescriptive therapy, as this response is created naturally.

Destabilization
While there is a relationship between WBV and GH response, the cause and effect relationship is not fully understood. In a 1988 literature review on endocrine response to exercise, a 220% increase in GH was demonstrated with conventional resistance training, but heavy (70-85% of 1RM) Olympic lifting had a 609% increase in GH (Kraemer, 1988). With Olympic lifting, stabilization is a key element to moving and balancing the heavy load throughout space, which appears to initiate reflexive balancing neuromuscular engagement. This is similar to the effect of WBV, as the platform destabilizes and in the destabilization, reflexive balancing neuromuscular engagement occurs. Of WBV platforms, Power Plate moves in a tri-planar manner and has slight tip/pitch in response to movement for both destabilization and safety purposes. Power Plate has long been recognized as the world leader in WBV platforms.

When a child learns to throw a ball, motor neurons fire in a synchronous manner to perform the physical action. The process of motor learning is dependent upon repetition and interpretation by the movement control center of the brain (the motor cortex). Over time, the synchronization of motor neurons firing becomes more efficient and effective (Hebb, 1949). For synchronization of motor neuron firing to occur, repetition of the action must be precise (Kottke, 1980). From an athlete training for speed and accuracy to a deconditioned elderly individual improving balance, this process is the same.

Whole Body Vibration (WBV) platforms provide a means to accelerate coordination and skill development by destabilizing the body, forcing reflexive subconscious neuromuscular action in muscular and connective tissue to rebalance the body. The vibrations are enough to cause reflexes to engage, however not enough to cause a user to fall. Individuals on a vibration platform are put through a repetitive pattern of destabilization, and the repetition and precision of this movement is the essence of motor skill development.

Clinical research with elderly and aging populations has shown improved balance, circulation, and locomotion with use of WBV. Researchers found that after a 2-month program with elderly subjects, mean age of 72, using strength exercise and once per week WBV, the walking speed, step length, and the maximum standing time on one leg were significantly improved over the control group that just performed strength exercise (Kawanabe, et al. 2007). Similarly, another study found in women age 60 and above who engaged in WBV three times per week, statistically significant increases were seen in stability (Cheung, et al. 2007). These findings were also replicated with high-level ballet students showing how all populations can respond to the motor learning process with WBV (Annino, et al. 2007).

Harmonic Vibration When the body makes a neurological change in motor learning/skill development, precise repetition is required and with WBV, vibration precision is key to effectiveness. Power Plate®, because of its higher standard of precision, has long stood out among WBV products as the preferred brand of medical professionals, celebrities, and high-performance athletes. Power Plate® moves in a precisely controlled triplanar formation, causing vibratory stimulus that is exacting from one vibration/movement to the next. A graphic example provided by an Oros® vibration analyzer of the Power Plate® sine wave shows the precision of repetition in each vibration:

Other WBV platforms exhibit a wide range of sine wave inconsistencies, some varying so much as to reduce the value to motor neuron learning to be virtually useless. The following is an example sine wave provided by an Oros® vibration analyzer of another WBV platform:

Power Plate Pro5 AIRdaptive HP provides the most precise repetition in the WBV platform category regardless of loading, thereby providing a superior stimulation to the nervous system developing balance, and motor skills, in a shorter time frame than with other interventions, as well as increasing circulation, flexibility, muscular recruitment, and anti-aging hormone release.

Cardiac Dysfunction
The leading cause of death in the developed world is myocardial infarction (heart attack), a direct consequence of atherosclerosis or hardening of the arteries. As the arteries lose their flexibility, the heart pumps blood but the walls of the arteries do not move as they should, causing an increase in blood pressure. As the heart pulses, and the pressure is higher, the heart has to work harder to contract. The higher the pressure gets, the greater likelihood an individual will have a cardiac incident (heart attack or stroke). Atherosclerosis is primarily caused by chronic dietary habits, but also has environmental and genetic factors. Conventional exercise reduces blood pressure by increasing the strength of the heart but does not affect arterial stiffness to a significant degree (Casey, et al. 2007).

A Potential Solution via Reflexes
Medical researchers have been studying methods to decrease the stiffness of arteries with pharmaceutical interventions, but in 2005, researchers in Japan found that the muscular reflexive engagement of the body through whole body vibration (WBV) exercise significantly increased blood flow and oxygenation (Yamada, et al.). Three years later a different group of Japanese researchers found that WBV (using Power Plate) acutely decreased arterial stiffness with males in their mid twenties. (Otsuki, et al. 2008) This research has now given way to a greater level of understanding of what WBV can do for de-conditioned patients who suffer from cardiac dysfunction, as well as creating interest from the scientific research community.

Dr. Arturo Figueroa, an associate professor at Florida State University, has conducted numerous studies on the effect of using WBV/reflexive activation to decrease arterial stiffness. The findings of Dr. Figueroa and his research group showed decrease in arterial stiffness in a young obese/overweight female population. This population differed from the young males that were previously studied, as obese/overweight females are often not able to engage in conventional exercise. Subjects decreased their arterial stiffness significantly using WBV therapy 3 times weekly over 6 weeks. (2011, 2012) Dr. Figueroa has continued to study populations who are at greater risk of heart attack and stroke, with greater levels of de-conditioning. In 2013, he and other researchers began studying similar protocols with post menopausal hypertension and pre-hypertension patients. (Figueroa, et al. 2014) Results were also seen passively with stroke survivors in a parallel study at Florida State University. Stroke survivors in this study could not engage paralyzed lower limbs yet still received the benefit of lower blood pressure and decrease in arterial stiffness using the standard squatting protocol. (Koutnik, et al. 2014) Finally, Dr. Figueroa and his research group found that blood pressure reduction and reduction of arterial stiffness with lower leg strength increase. With conventional exercise, these two elements are not necessarily correlated. This suggests that WBV can be an effective treatment for decreasing cardiovascular risk in postmenopausal hypertensive and pre-hypertensive women (2014), in addition to the previous populations studied.

Unlike most WBV platforms, Power Plate moves in a triplanar manner and has slight tip/pitch in response to movement maximizing reflex engagement with increased safety. Power Plate has long been recognized as the world leader in WBV platforms. Dr. Arturo Figueroa and the Florida State University researchers chose Power Plate as the basis for their WBV/reflexive study and received no compensation from Performance Health Systems LLC, or any subsidiary.

Be the first to rate this item!